Gentlemen of the press and the entire citizen of our nation Nigeria, it is disheartening to note that the Federal Ministry of Health (FMOH)has been turned to the Federal Ministry of Medical Practitioners. It is highly vivid that the Minister of State for Health, Minister of Health and the Minister of Labour and Employment (FML&E) all being Medical Practitioners are bias in how they handle demands of other Health care Professionals under the aegis of Nigerian Union of Allied Health Professionals (NUAHP) or Joint Health Sector Unions (JOHESU).
This was glaringly displayed in the way they negotiated and agreed on all issues presented by the National Association of Resident Doctors (NARD). This act of discrimination, double standard and preferential treatment of the Medical Practitioners in the Health sector is highly discriminatory and lucid act of favoritism and injustice were all displayed during the process of negotiation.
The FMOH never rolled out the usual “no work, no pay” because the Ministers and the NARD who are on strike are from the same constituency. If it were JOHESU, FMOH/FML&E will not hesitate in brandishing/relishing that circular.
Secondly, the FMOH/FML&E led by Prof. Adewole Isaac and Dr. Chris Ngige respectively never thought it necessary to use Court injunction to stop the strike process but if it were NUAHP/JOHESU these Government appointees would have gone to obtain Court injunction to stop us. Where lies justice?
We are being discriminated in our own country; our legitimate rights got from Courts of competent jurisdiction are flagrantly being disobeyed daily by the FMOH/FML&E. This is anarchy, impunity and attempt to provoke NUAHP/JOHESU members to take laws into their hands.
NUAHP/JOHESU ultimatum is expected to elapse on the 12th of September, 2017. Considering other mobilization factors and to give the Government further room to address our demands, come 30th September, 2017, if the Government refuses to meet our demands, the union will have no other option than to shut down health care services nationwide.
The demands are as highlighted below;
1. Revamping the infrastructure in the tertiary health institutions
2. Report of the inter-ministerial sub-committee on critical matters in the health sector
3. Professional autonomy
4. Headship of departments/units in hospitals
5. Enhanced entry point (EEP) for medical laboratory scientists and radiographers
6. Non- payment of backlog of arrears
7. Residency training for other health professionals
8. Appointments of consultants and payment of specialist allowance
9. Surgeon general
10. National health act implementation
11. Retirement age for teaching hospital staff
12. Abolition of the position on Deputy Chairman Medical Advisory Committee DCMAC
13. Skipping of CONHESS 10 and payment of arrears in compliance with National Industrial Court of Nigeria (NICN) judgment
14. Adjustment of the CONHESS salary structure
15. Stagnation and nomenclature
16. AMLSN/BMLS issues in UCH
17. Appointment of other health professionals as consultants and payment of the specialist allowance
18. Appointment of CMDs/MDs of tertiary hospitals in accordance with the extant laws
19. Reneging on collectively bargained agreements
20. Call duty allowances for health information managers and dieticians and others
21. Sabbatical leave/annual leave
22. Pension arrears
23. Taxation.
Other discriminatory attitudes by the FMOH/FML&E to other Health care Professionals are also highlighted below:
i. Wrong and selfish interpretation of Decree 10 of 1985 the law that governs our teaching hospitals since 1985 till date;
ii. The refusal to honour and implement collectively bargained agreement since 2009.
iii. The refusal to honour Industrial Arbitration Panel and National Industrial Court Awards/Judgements.
iv. Introduction of Partisan and discriminatory remuneration packages in favour of medical practitioners.
v. Having made NMA members minister since 1999 to date, with myriads of crisis, it is strongly canvassed that in appointing a new minister of health, appointing members of Allied Health Professionals as the head of the ministry for balancing, harmony, social justice, peace and all round development will be ideal.
vi. The Abudullahi Bello Presidential Committee’s report on a harmonious work relationship amongst health workers and Professional groups in the health sector in October 2011, had made a similar recommendation.
vii. Non – Circularization and Implementation of Adjusted CONHESS Salary Structure as done for NMA.
viii. The non – circularization and implementation of the adjusted CONHESS salary structure as done for our NMA counterparts in the same sector is generating a lot of agitations in the system.

We therefore urge well meaning Nigerians, the Royal fathers and the press to intervene and prevail on Government to implement all agreements and memorandum of understanding reached with NUAHP/JOHESU on or before the expiration of the ultimatum to avert the looming industrial action. 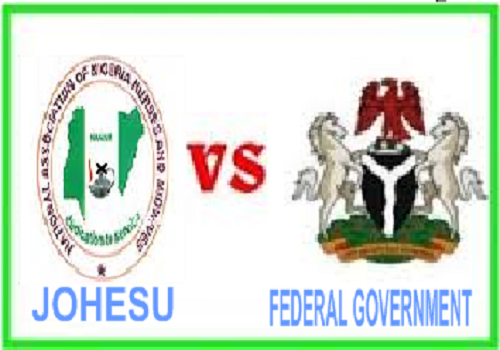 How To Become a Registered Nurse In Nigeria (2023) – Halimatu Abdullahi

National Association Of Nigerian Nurses And Midwives should Take A Leaf From The Royal College Of Nursing, RCN

About £10,000 Is Budgeted For Every UKRN Annually For Courses And Training – Olubukola Akinmolayan

DMCA: If you feel your content have been used on this site without your consent, contact us now.

Are you a nurse who loves writing and do magic with words? Would you love to be an author on this website? We’ll be happy to have you.

Kindly fill out the form below so we can add you as author to the website.