One of the smallest babies in the world to ever survive is finally going home – after spending the first six months of her life in the hospital.

Baby Manushi weighed just 400 grams when she was born 12 weeks prematurely after her mum began to suffer from complications related to the pregnancy.

Born on June 15 in Rajasthan, India, the premature baby girl was not breathing when she first entered the world. 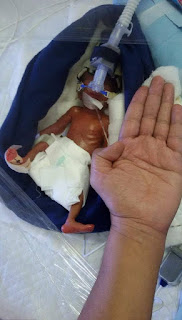 And with paper-thin skin, underdeveloped organs and feet the size of a thumbnail, it was unlikely that she would survive.

But despite the odds, Manushi, who is believed to be the smallest surviving baby ever born in Asia, began to gain weight.

Born via emergency Caesarean section after an ultrasound during Seeta’s pregnancy revealed that there was no blood flow to the foetus, little Manushi was delivered at just 28 weeks.

She was immediately put on a ventilator and transferred to the Jivanta Children’s Hospital NICU but the chances of survival were slim.

Even if she did survive, doctors informed Manushi’s parents that their daughter only had a 0.5 per cent chance of surviving without brain damage.

According to her doctor, Dr Janged: “When the baby was born, we were uncertain of what would happen.”

And in the first few days after her birth, Manushi lost weight – narrowing her chances of survival even further.

But Manushi proved she was strong – undergoing multiple transfusions of essential nutrition, blood transfusions, and respiratory support until she was stable enough to take milk at seven weeks.

Dr Janged said: “We had to start the baby on total parenteral nutrition, which basically means giving all the essential nutrients, such as amino acids, lipids, carbohydrates, minerals, multivitamins, and trace elements, directly into blood circulation.”

However, defying the odds, at six months and a whopping 5.2lbs, Manushi has finally been sent home.

And, in addition to saving their daughter’s life, Manushi’s doctors have waived what would have been an estimated one million rupees (£11,500) hospital cost.

Copyright © 2018 | Fellow Nurses Africa | All Rights Reserved
previousTRUST: What Is It?
nextNurses Mourn As Accident And Emergency Nurse Dies Of Lassa Fever