NURSING IN NIGERIA: A TREASURE IN THE VERGE OF COMPLETE EXTINCTION PART 2

INSTANCES:
In 2017, I and few other like minds in  Rivers State came together to examine the problems our Nurses are facing in our State, especially the junior Nurses. These problems were eventually identified, and solutions were brought forward to tackle them.

The first solution that was identified was to bring all the junior Nurses together under one Umbrella to enable them have one voice when these issues are being addressed. This call for forming a body, not necessarily an association, fortunately someone suggested we pitch our tent on the already existing Forum in  Rivers State called ‘Clinical Nurses Forum’. This forum was formed by some great minds, with the same intention as ours. 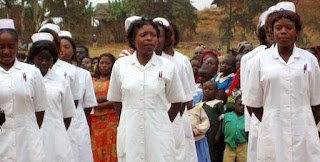 We started by engaging the excos of this forum. We pleaded with them to come join us in addressing these issues our Nurses are facing. Especially the over 93 Nurses who were absorbed and abandoned by the State government. They accepted our request. And a memo for an emergency meeting was released. Over 200 junior Nurses in Rivers State attended that meeting.

Deliberations were made. And at the end of the meeting, two committees were set up. One was the committee that will raise a communique and the other was the committee that will engage all the stake holders in Nursing in Rivers State. The state NANNM chairman, DNS Ministry of Health, DNS Hospitals Management Board, DNS primary health care Board, Principal school of Nursing, Nursing Heads in all the general Hospitals and Braithwaite Memorial specialist Hospital (BMSH).
The purpose of that engagement was to put them on the know and to also reassure  NANNM that we are not coming to hijacked their responsibilities,rather we come to give them an assisting hands.

In less than one month, the two committee rounded up with their specific assignments. And another meeting was scheduled, in that meeting, two way forward was agreed upon  1. A protest and  2. Industrial action.
But we did not ignore our limitations.

We know in civil service, it’s not in the jurisdiction of clinical Nurses forumthe to call for a strike action. Therefore, we decided to return back to NANNM to discuss these resolutions and  the roles we want them to play in achieving our goals. At the end of our second meeting we had with our parent body (NANNM), NANNM ask us to write to them stating these numerous problems we identified, and that an ultimatum should also be given in that letter. That once we write, they will write to appropriate authorities to act accordingly and also to DSS and other security agencies to give us a clearance for our protest.

Immediately we came back, wrote to NANNM. Instead of NANNM sticking to the agreement we had with them, they took our letter to DSS in form of report that we want to have a protest. We were  invited by the DSS, we went. They told us that, they have carried out some investigations into the issues we raised in our letter and that they found out that, there’s no official complaints that have been Lodge to the appropriate persons that’s suppose to Attend to  the issues we raised. We were then advised by the DSS to forward the same letter we wrote to NANNM to the appropriate persons such as the permanent secretary MOH, head of service and chairman state civil service commission, that they will help us in following up the letter. Which we did without wasting time.  That was when everything fell apart. Calls started coming to the signatories of that letters and NANNM.

The Chairman of the forum went as far as refuting our letter.
At a point, we were chased with DSS and Men of the Nigeria police. And in one occasion, our meeting venue was barricaded by Men of SARS. We decided to pull out from the clinical Nurses Forum.

Till today, the Nurses who were absorbed and abandoned by the state government are  still suffering the non payment of their salaries  till today.
The Director of Nursing services, Rivers State ministry of health and the principal school of Nursing Port Harcourt, who were both  suspended in one day on the basis of student Nurses protest which we demanded for their reinstatement in our letter, were never recalled into service and no panel of inquiry was even set up to give them a fair hearing till today.

And all the  problems we identified and we’re demanded for government’s attention are still here with us and some  has since been compounded.

Stay tuned for the concluding part.