Nurses takes on doctors over management positions in public hospitals

Nurses takes on doctors over management positions in public hospitals 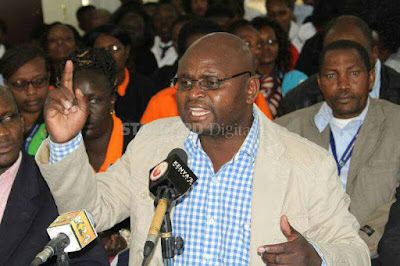 By;Paul O Ogemba
Kenya National Union of Nurses (KNUN) Secretary General Seth Panyako addressing a press conference in reaction on the brutal murder of a patient in Kenyatta National hospital which led to interdiction, arrest and arraignment of four health staff. [Photo by Willis Awandu/Standard]
Nurses have gone to court to try to stop the implementation of the new Health Act.
The Kenya National Union of Nurses (Knun) argued that the Health Act (2017) was deliberately designed to favour doctors in top management positions in public hospitals while discriminating against nurses despite the fact that they were key stakeholders in the provision of healthcare.
“The new laws are unconstitutional to the extent that they limit the right of nurses and other professionals in the human health field from holding top positions they have previously held and restricting them to doctors,” said lawyer Charles Wabwora.
The nurses’ union asked the court to suspend five sections of the Act, claiming that the Ministry of Health ignored their input when drafting the new rules.
They also want the court to declare the Act unconstitutional and stop both the national and county governments from terminating the contracts of nurses holding senior positions and replacing them with doctors.
Among the sections they want declared unconstitutional is the provision that creates the office of the director general for health but limits the qualifications to be a medical practitioner registered by the Medical Practitioners and Dentists Board.
They are also contesting the qualifications of a county director of health, which the law also states must be registered by the Medical Practitioners and Dentists Board.
“The requirements are discriminatory to other cadres of health professionals given that only doctors registered with the Medical Practitioners and Dentists Board qualify. We have nurses with many years of experience and higher education but cannot apply for the positions,” said Wabwora.
The union is also against the establishment of a human resource health advisory council.
Copyright © 2018 | Fellow Nurses Africa | All Rights Reserved
Share on facebook
Share
Share on twitter
Tweet
Share on whatsapp
Share
Share on telegram
Share