The Quack Nurse – A Time Bomb: Eradicate Quackery And Save Lifes 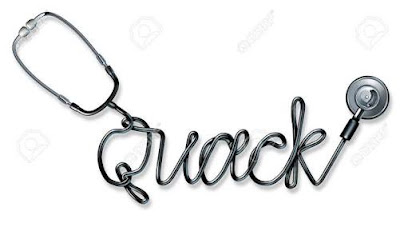 The Nursing Profession takes pride in the fact that it is committed to protecting, promoting, and improving health care for all as well as serving the public in a wide range of roles and work settings.

Therefore, as Nurses it is only fitting that we take one week each year to celebrate our profession and the vital roles we play in health care.

This week long celebration tagged INTERNATIONAL NURSES WEEK begins annually from 6th to 12th of May which is Florence Nightingale’s birthday who happens to be the mother of Nursing and commonly referred to as “The Lady with the Lamp”. The celebration features a host of events across the globe to honour Nurses for the work they do, and also educates the public about the role nurses play in health care.
Being the largest of the health care professions, it is a call for the National Association of Nigerian Nurses and Midwives (NANNM) to follow suit the leading role set by other International Nursing Associations which has always led efforts to celebrate Nursing and ensuring that recognition is promoted as widely as possible as well as recognizing the contributions that Nurses and Nursing make to the community.
One particular plight plaguing the Nigerian Nursing Profession has always been “quackery”. Much has been written about quackery in nursing by concerned nurses, but little to nothing has been done about it.
Quackery is and still remains one of the leading causes of increasing mortality and morbidity in Nigeria health sector. The poor masses are the victim of this dangerous and widely increasing practice.
Thousands of innocent lives are lost and many more are seriously affected as a result. The exact number of deaths resulting from quackery remains unknown due to lack of reliable data, however there is clear evidence that quackery poses an increasing health problem to the Nigerian populace. Having a relative, friend or co-worker die as a result of sub-standard health care and quackery is really disheartening. It is clear that the Nigerian healthcare is not among the best in the world, but accepting, practicing and promoting quackery is like watering down an already watered down system!!!
“Quackery in nursing” is the promotion of fraudulent or ignorant nursing practices. A quack nurse” is an individual who is involved in nursing malpractice without possessing required qualifications, professional authority and legal right to undertake such activities in the first place.
Many factors play important roles in the ever increasing practice of quackery in nursing and constituting a serious problem in patient care.
Among which is lack of moral training and responsibility on the part of the individuals who engage in this heinous act and training. It is morally, ethically and socially unacceptable to perform an action which is beyond ones professional capabilities. By losing this insight and the sense of patient care possessed by a trained nursing professional, the quacks and their trainers become deprived of a sense of empathy and honesty. The Nursing Act acknowledges that quackery is illegal, yet there is no strong evidence of implementing this rule. Due to a lack of robust legal system and inadequacies in the judicial deterrence, the quacks continue to practice rather openly to such an extent that it has almost become a norm which reflects that quackery has become an accepted practice in the health sector.
A lack of understanding of differences between a Professional Nurse” and a quack nurse” has also contributed a great deal in the spread of quackery in nursing. Often, patients and their relatives do not question the attending personnels qualifications and competencies, they also lack the knowledge of who is truly a Professional Nurse licensed to provide the care they receive. This attitude of the general public also encourages quackery.
In order to eliminate this alarmingly growing problem which is adversely affecting the health of patients receiving nursing care, it is a collective responsibility of the nursing associations, governing bodies, health care professionals, health institutions, law enforcement agencies and the judiciary system to take clear, urgent and practical steps to stop this crime against the patient population and humanity as a whole.
The Nursing and Midwifery Council of Nigeria (NMCN) as the only relevant regulatory and licensing body alongside the Federal Ministry of Health (FMOH) have a legal duty to lay down clear guidelines with regards to professionals competencies in relation to qualifications necessary for nursing practice.It should be made very clear what is expected from a Registered Professional Nurse and what is considered as unprofessional and unethical so that in the event of quackery, appropriate legal actions may be taken in line with the set standards.
These authorities should categorically prohibit quackery in all circumstances and recommend legal actions against those found guilty.
Furthermore, clear and unambiguous definitions of standards of practice and what constitutes quackery in nursing is crucial. An up to date register for Registered Nursing Professionals providing the details of their credentials, scope of practice and designated professional duties is very important.
In addition, a close collaboration between the Nursing and Medical licensing bodies is required. There is a desperate need that all health related institutions and governing bodies come up with a collective policy to stop quackery in Nigeria as related to nursing practice.
Policies and guidelines would only become effective if they are implemented according to the required standards. The law enforcement agencies and the judiciary system need to appreciate the gravity of quackery and its impact on the lives of poor Nigerians.
Quackery should be classified as a crime and perpetrators should be brought to justice and be held responsible for compensation to the losses incurred by such practices.
As we commemorate the 2018 International Nurses Week with a national theme of “NURSING: A VOICE TO LEAD, HEALTH IS A HUMAN RIGHT” we hope and look forward to a Nursing Profession and Practice free of quackery and all its attending menace. It is important we know that patients are the reason we are nurses.
KELVIN Ossai
Copyright © 2018 | Fellow Nurses Africa | All Rights Reserved
previousINTERVIEW: No Work No Pay Policy, Baseless And Against Public Service Rule – Morakinyo
nextEditorial comments: Key To Resolving Current Health Issue