Fear of another nationwide strike in the health sector is hanging on the loose as the minister of health, Isaac Adewole has confirmed that government may not be able to pay federal health workers nationwide after resuming from near two months strike

The minister of health, Isaac Addewole however directed the CMD’s to compile few list of staffers due to paucity of funds as plans have been concluded to reduce by more than half the over 750,000 workforce of JOHESU members that recently returned from strike after truce and intervention by the NLC and the National Assembly

Efforts to reach the minister and the media team along with some of his personal aides proved abortive ,as they have deliberately shield away from ‎any media statement that Involved the refusal to pay health workers in the last two months running into the third month

In a face of with the President of the NLC,Ayuba Waba,it was confirmed that President Buhari may not be unaware of the decision against the workers in the‎ federal health sector as they insisted, the best practice and policies must be invoked

Efforts by the international bodies saddled with the health programs ‎had warned on the dangers of government playing down on the. Importance of health to ordinary Nigerians by refusing to pay worker

It was also confirmed that only the CMD,University of Maiduguri teaching hospital paid the two months arrears after the health workers resumption from strike but was queried by the minister ‎to show course why he will not be sanctioned

Many sick people with chronic and terminal diseases have died during the period of strike either for their inability to pay for medical expenses and bills or access quality medical care owing to lack of professional hands to attend to them. 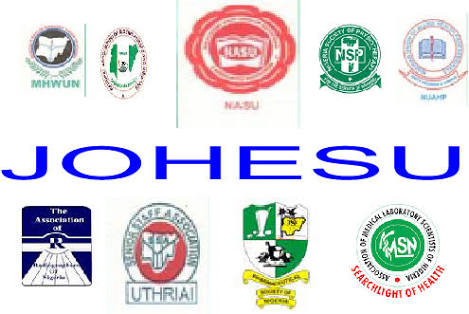