Barely a month after one Dr. Okolo went wild allegedly beating a Registered Nurse at a private hospital at Awoyaya, Ibeju-Lekki area of Lagos state, a junior doctor (House Officer) identified as Dr. Nuwar Alhaji Modu has decided to take the baton from his senior colleagues as he beat up a Nurse at the early hours of Thursday, the 26th  day of July, 2018. 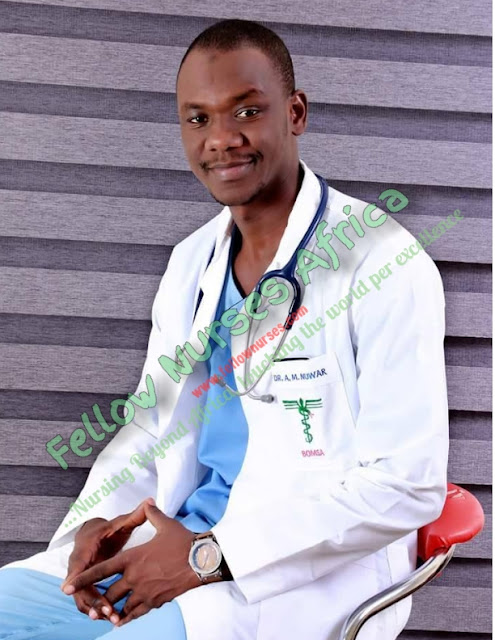 The incident which occurred at the University of Maiduguri Teaching Hospital, Maiduguri, Borno State had left professional Nurses wondering if these  frequent cases of assaults pummeling the landscape of our hospitals against nurses are jointly planned by the medical association or its just an ugly coincidence.
We would recall that another nurse working with the Ondo State Government was earlier assaulted some months back by a Doctor.
The Dr. was said to have poured fluid used in dressing septic wound of a patient on her during the process of wound dressing and as at the time of this report, nothing has been done to address the dastardly act. 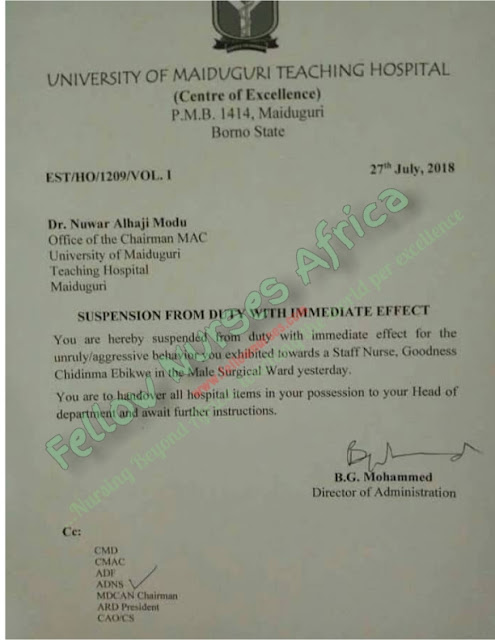 According to an eye witness from UMTH, Nrs. Ibekwe (the assaulted nurse) got to the nurses’ station on that particular day and met some house officers sitting and gisting, a particular one was sitting on the seat meant for the in-charge nurses (Matrons) so she told him to kindly standup and take another seat as that was nurses’ station but the doctor refused, this further led to a misunderstanding between the duo and the doctor got furious and started hitting her.
In his words, Dr. Nuwar rampageously landed  hot slaps on the nurse when she told him to stand up from the seat meant for the matrons at the nurses’ station and sit on the vacant seat beside him. Her face became swollen, the following day she was rushed to the emergency unit of that hospital but the casualty officer who attended to her started begging on behalf of the doctor that she shouldn’t take up the case that she should just forgive and forget. In fact, he didn’t document the history, he only made some prescriptions and told her  to go without any further investigation, he said.
Nrs. Goodness Ibekwe when contacted by Fellow Nurses Africa correspondent confirmed the incident, according to her, this still looks like a dream to me because I never believed any doctor in his right senses could go this far to humiliate me at my duty post simply because I asked him to standup from our matron’s seat and sit on another vacant seat.
On that fateful day, I went downstairs to write my name at the Nursing department and when I came back, I met the house officer sitting on the in -charge’s (matron’s) seat and another house officer sitting on the other chair. I opened the nurses’ office and I saw CNO Mschelia eating, I asked him where nurse Sa’ad is, and he told me he’s inside the ward attending to a patient that I should go and stay at the nurses’ station. So I went and told the house officer (Dr. Nuwar Modu ) to please stand up and sit on the other chair that this seat belongs to our in charge nurses, he said that he will not stand up and that I should do my worst. I repeated myself and said please standup and the other house officer said to him, standup that this is nurses’ station, he replied him that he should not mind this small girl (referring to Ibekwe) that he will show me who he is today, he stood up and slapped me. In the process of self defence, I pushed him away and he hit me again on my forehead, lower jaw, ear and he continued hitting me until Dr. Jemila ran in to separate him away from me. He started lying to jemila that I hit him first and pushed him away. Everyone gathered and began to tell him to stop and he started saying that he will deal with me and nobody would stop him. I have never been abused and cheated this way in my entire life. I call on meaningful Nigerians to come to  my aid, I must not suffer in vain.
A senior  nurse of that hospital who demanded anonymity spoke to Fellow Nurses Africa correspondents when contacted, according to him,  we don’t have a functional NANNM executive at this hospital at present, though we heard that the hospital management had suspended the erring Doctor.
Sometimes ago when we noticed a lot of fund misappropriations , corruption and gross incompetence of the excos, we passed a vote of no confidence on them. Presently we have acting NANNM  executives. 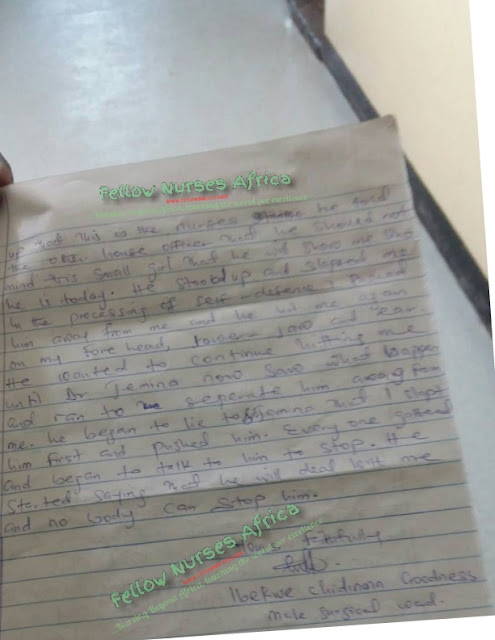 The hospital management has not been treating nurses well at all. Motivation is lacking, they just treat us as nobody because no one to fight for us. Some two  years back, a SNO by name Ma’am Kyari was suspended and had been on suspension since then just because she asked a Prof. not to abuse the nurses’ station.
A committee was set up which included our ex-NANNM chairman and they suspended her unjustly since two years now just because she was asked to provide a medical report indicating she’s mentally unstable and she refused.
Excuse me, how will you tell a mentally stable individual to provide a medical report that she’s mentally unstable just because you’re looking for a reason to terminate her. Is it done anywhere in the world? 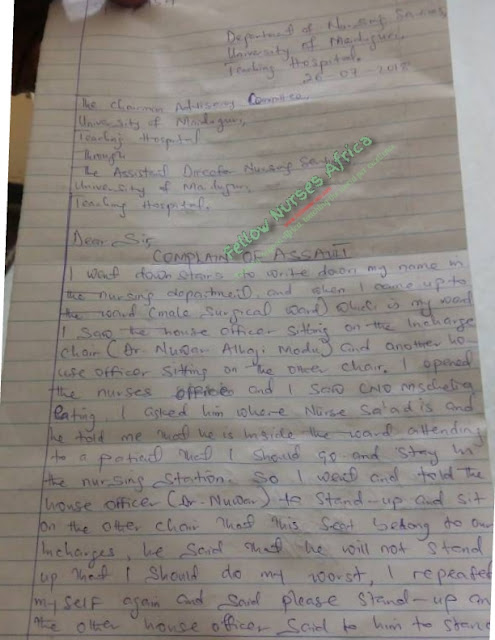 We have written to the NANNM national to come to our aid and savage the situation but they have been playing cold.
We have called on them on several occasions and they have failed us. We call on Fellow Nurses to come to our aid. We are poorly motivated. The hospital is collapsing and the patients are dying in turns when they could not receive optimal care, he said.
All efforts to reach Dr. Nuwar Modu proved abortive.
Bullying and assaults against Nurses are becoming rampant day by day. You either get bullied by the employers, a doctor or even aggressive patients. It is high time a bill is sponsored to permanently address this workplace violence against professional nurses. This is the third reported case of assault within the last 3 months coupled with many unreported cases.
Oluwatosin K. Odunayo
For F  N A News.
Edited by Ogunleye Oladoyin Ayodeji
(All Rights Reserved)
Copyright © 2018 | Fellow Nurses Africa | All Rights Reserved
Share on facebook
Share
Share on twitter
Tweet
Share on whatsapp
Share
Share on telegram
Share