There  is a war about to be unleashed in nursing, you read that right. A Facebook user was allegedly accused for wanting to tarnish the image of the School of Nursing, Abeokuta. 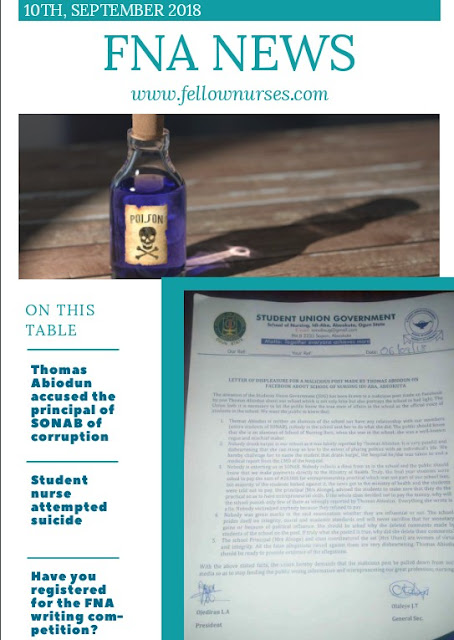 The SUG of SONAB took the bait and wrote a letter to the alleged accuser, named Thomas Aboidun who is a staff nurse in Lagos state, how she lied about the accusation and noting that no student nurse of that institution ever attempted suicide. 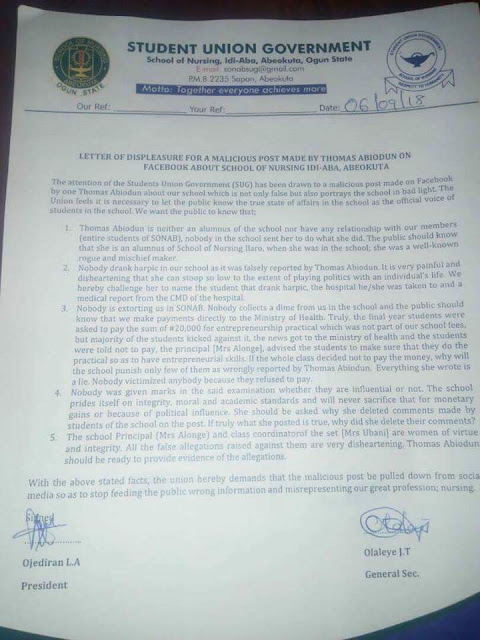 Thomas Abiodun had earlier this month went on Facebook to accuse the principal of the school Mrs Alonge of extorting the students. According to her:
In April 2018, the principal of SONAB, Mrs Olajumoke Dele Alonge, ordered the students to pay the sum of 20,000 naira each to be offered Entrepreneurship (A course mandated by NMCN which  were taught free when she was in school) but the students resisted because their colleagues in school of Nursing Ilaro paid 1,000 naira  for the same purpose and Ijebu Ode students paid 1500 naira.. They pleaded with the principal to reduce the illegal levy but she insisted on 20,000 naira  each or nothing and they refused to pay.
At first, the principal vowed not to allow them write their Hospital Final Qualifying Examination (preparatory exam written before NMCN exam which is one of the criteria for writing NMCN exam because the school will be bold to present those that pass this exam for NMCN exam) but after much pleading by the students coupled with lots of pleading and encouragement by cash from the parents, she allowed them to write the exam after one week but due process was not followed by the school because an external examiner was supposed to set the exam questions, invigilate and mark the answer scripts.
After resistance to pay the sum of 20,000 naira and cancellation of exam (which was later conducted for them after one week), some of the tutors and the principal started victimizing the students.
A tutor from school of Nursing Ilaro was brought as Examiner (which is improper because of favouritism). Besides, the tutor that was brought is also a major oppressor of students and suspected to be having mental disorder due to failed marriage. Even right in the exam hall during practicals, she told 3 students she would ensure they fail and assured another girl she would pass and immediately jotted down their examination numbers.
She continued, before the day of the exam, the landlady of one of the students went to report her at the school claiming that the girl did not pay NEPA bill of her room when she was away (on clinical posting at Aro).
The girl was made to face panel (Disciplinary committee) and the principal called the mother of the student threatening to expel her daughter and the mother had to start pleading and the girl paid the bill.
On the day of examination, the same student was delayed for 45 minutes outside the exam hall and was not given extra time (the paper was to last 1hr 30 minutes). After the exam, the principal addressed the class and told them that originally, 8 people passed out of 38. Meaning there was mass failure but 13 people’s results was upgraded based on influence while the remaining 17 would have to wait till May.
The principal said the remaining 17 would be the ones to learn their lesson the hard way by paying above 150,000 naira for extra school fees for resisting to pay the 20k.
Abiodun disclosed that NANNM had been informed, and they promised to investigate the matter.
Every effort to persuade Abiodun to provide evidences backing up her allegations proved abortive.
It looks like the case will not be ending so soon, as she asks the school to press charges against her if she is lying. She further stated in the interview that students are scared to disclose the truth because they are afraid their school’s accreditation will be withheld.
However, Fellow Nurses Africa correspondents interviewed some of the staff and students of the institution.
The president, Students’ Union government of the institution when contacted debunked the allegations, according to him, SONAB is built on integrity and discipline. Nothing of such ever happened and it will never happen. Abiodun is just an attention seeking Fellow who’s looking for cheap popularity.
Hammed Motunrayo, who happened to be a class governor in the institution when interviewed disclosed that No student drank Harpic to attempt suicide.
“SONAB is a school with high integrity and would never compromise that. No student was passed out of favoritism, or political influence, nobody was given any mark, either influential or not. No tutor is exhorting or victimizing any student. Thomas Abiodun is not a student of our school, I believe whoever told her all that just want to tarnish the image of our school. If she has every evidence, she should please tender them” she said.
One of the final year students who demanded anonymity also spoke with Fellow Nurses Africa, in her Words, I dont know how someone will just wake up one day and started saying what never happened. Although it was true that a student nurse was delayed for 30minutes during the exam because she had issues with her landlady and she was reported in the school. But nobody drank harpic.
All efforts to reach the principal of the school proved abortive.
This is a big dilemma for those of us who are the readers.
Could Thomas Abiodun be right and the school management is trying to cover up?
Could she have made these allegations for fame or she’s just willing to tarnish the image of the school
Could there be anything the school management is hiding from the public?
Make your views known in the comments box below
Copyright © 2018 | Fellow Nurses Africa | All Rights Reserved

Like Loading...
previousNMA Set To Unite With JOHESU, Says We can solve our problems by Ourselves.
nextTHE NURSING UNIFORM, HOW SACRED?