THE NURSING UNIFORM, HOW SACRED?

Few days ago I came across a wedding video online where some group of Nurses were seen in white dancing and picking money, one was even carrying the Nurses lamp. This has generated some missed feelings amidst Nurses as Some were of the opinion that such act is a disrespect and a dent on the Nursing uniform and the Nursing profession as a whole, while others see it as a welcome development that needs to be embraced.

This inspired me to research about the Nursing Uniform and what exactly is unique about it. In this article, our focus shall be the sacredness of the Nursing uniform, shall we?

The Nursing uniform, how sacred is it? 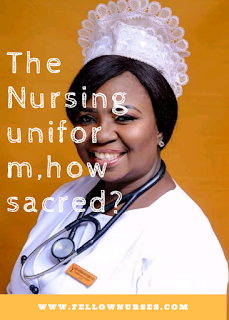 Nurses’ uniforms have undergone many changes since they emerged in the 1800s. From the days of floor-length dresses with aprons to today’s variety of colorful scrubs, the design of the uniforms has changed based on functionality, professionalism, and the role of the nurse.

Wearing a uniform indicates affiliation with a group and evokes a sense of pride in the wearer. Some people also believe a uniform builds a spirit of comradeship, enthusiasm, and devotion among nurses while some believe it is a form of professional identity.

Like the military and paramilitary wear uniforms, like the lawyers and the pilot uniform so also is the Nursing uniform. What then differentiate it from all of these? What makes it unique?

The uniqueness of the Nursing uniform could be found in the color. The color white is color at its most complete and pure, the color of perfection, purity, innocence, wholeness and completion.

The color white is cleanliness personified, the ultimate in purity!

White is a color of protection and encouragement, offering a sense of peace and calm, comfort and hope, helping alleviate suffering and emotional upsets.

Oh, What a perfect uniform to care for the physically, emotionally and psychologically wounded individuals!

Having known the uniqueness and sacredness of the Nursing uniform, it is expedient for Us to note that any form of antisocial and abnormal behavior should be strictly PROHIBITED while on the Nursing uniform, the behaviors and roles we assume while on uniform will not only make or Mar us but will also have a lasting effect on our professional identity.

Have you wondered why it is said to be  prohibited to kneel down in the Nursing uniform? It is a dent and a sign of weakness on the profession.

Having Known this, is it a bad attitude to dance while on uniform?

It is important for us to know that the Nursing uniform is sacred and as such respect ourselves for the sake of professionalism anytime we are putting it on because it is a professional identity.

As a matter of fact, is an act of unprofessionalism to wear the uniform outside the hospital premises. It is appalling to see Nurses in at ATM stands, market square, Banks, supermarkets and other public places wearing the Nursing uniform. You will even see some on motorcycles, this is far from being professional, sometimes you find it difficult to believe they are not Auxiliaries.

But Military men wear their uniforms in public places?

They constitute no harm to the public through their uniforms. Nurses spend hours on their work caring for patients with different kinds of diseases as a result of viral and bacterial infections, the Nursing uniform can serve as mode of transmission for these bacteria infections to the unsuspecting members of the public.

A study conducted at Connecticut Hospital some years back to gauge the role that clothing plays in the spread of methicillin – Resistance Staphylococcus aureus, MRSA  found out that if a worker enters a room where a patient has MRSA, the bacteria would end up on the workers clothes about 70% of time even if the worker never touched the patient. How much more a nurse that bed bath, tepid sponge, dress infectious wounds and other procedures while on their work?

CAN THE NURSING UNIFORM BE REPLACED WITH SCRUBS?

Scrubs are the sanitary clothing worn by surgeons, nurses, physicians and other workers involved in patient care in hospitals. Originally designed for use by surgeons and other operating room personnel, who would put them on when sterilizing themselves, or “scrubbing in”, before surgery, they are now worn by many hospital personnel. Their use has been extended outside hospitals as well, to work environments where clothing may come into contact with infectious agents (veterinarians, midwives, etc.). Scrubs are designed to be simple (with minimal places for contaminants to hide), easy to launder, and cheap to replace if damaged or stained irreparably.

Apart from the fact that  It is corporate and smart, it also provides comfort for the Nurses as against the Nursing uniform. In most countries of the world including the united States, medical scrubs has replaced the Nursing Uniforms.

As we have signed to the ambitious goal of changing the poor and bastardized image of the Nursing profession, Let’s stop being a contributing factor through our actions and inactions especially on uniform.

Together we can make Nursing great again.

OLUWATOSIN K. Odunayo is the Team Lead as well as the Editor-in-Chief, Fellow Nurses Africa.